Can Bread Really Make You Fat? 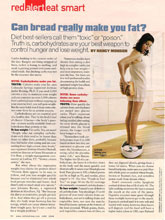 Diet best-sellers call them “toxic” or “poison.” Truth is, carbohydrates are your best weapon to control hunger and lose weight.

Carbo-bashing is the current order of the day: Burgers are being stripped of buns, turkey is losing its stuffing, and steak is gaining ground over pasta-and-salad meals. But ditching carbs may not be the smartest diet move.

TRUTH: Calories make you fat, says Colorado Springs registered dietitian Jackie Berning, PhD. If you need 2,000 calories a day to maintain your weight and you consume an extra 1,000 calories from carbohydrates without stepping up your exercise level, you will gain weight. But the same holds true if those extra calories come from fat or protein sources.

Carbohydrates are an essential part of a healthy diet. They’re the body’s fuel of choice: Glucose—the body’s gasoline—is more readily available from carbohydrates than protein or fat.

To lose weight: Use carbs. Yes, eat more! “People who eat complex carbohydrate–rich diets tend to be leaner than those on other diets, probably because they feel fuller after eating and are consuming fewer high-calorie, fatty foods,” says registered dietitian Marsha Hudnall, nutrition director at Green Mountain at Fox Run, a weight-management community in Ludlow, VT. “Variety creates satiety,” she says.

But what about the impressive weight-loss claims for protein diets? “Protein diets appear to be easy to follow, and you lose weight quickly because you’ve eliminated two whole food groups (starches and fruits). And there’s only so much steak you can eat,” says Johanna Burani, a registered dietitian in Mendham, NJ. “But because the diet is so restrictive, people get sick of it. And when they go off a protein diet, the body stops burning fats for energy, which can cause almost immediate weight gain. So it’s not a real fix for a weight problem.”

Numerous studies have shown that eating a diet high in complex carbs can help you to lose weight—and more important, maintain the loss. Yet there are few well-performed studies documenting the health and sustained weight- loss effects of high-protein diets.

MYTH: Some carbohydrates are more fattening than others.

TRUTH: How quickly the calories from carbohydrates are turned into glucose varies. That’s important when you’re talking about feeling satisfied after eating; the more slowly glucose is released into the blood stream, the longer you’ll keep hunger at bay.

“Researchers rank carbohydrates from 0 to 100 based on how fast they are converted to glucose and enter the bloodstream, a rating called the Glycemic Index (GI),” says Burani. The higher the GI of a carbohydrate, the faster it is broken down in the body and the more quickly and dramatically it raises your blood glucose level. Pure glucose is 100, a baked potato can be as high as 93, and nonfat, plain yogurt is 14. (See box, “Foods to Fuel You” for rankings of commonly consumed carbohydrates.)

To lose weight: Expand your definition of carbohydrate. You should get 55 to 60 percent of your total calories from carbohydrates, and we’re talking fruits and vegetables here, not just the starchy bread/rice/pasta options at the bottom of the food pyramid. Whole grains, fruits, and vegetables contain lots of fiber, so they are digested slowly, giving them a lower GI index. When you do choose bread/rice/pasta, make sure you pick fiber-rich whole grain or cracked wheat breads, brown or Basmati rice, and semolina pastas made from durum wheat.

Don’t overcook carbs: Spaghetti cooked al dente has a GI of only 41. The light cooking maintains the layers around the starch at the core of the pasta. Digestive enzymes must gnaw through these multiple layers to get to the starch. If pasta is cooked until it is very soft and loaded with water, however, these layers will degrade and the food will have a higher index (close to 100), says Richard Podell, M.D., author of The G-Index Diet. If you crave potatoes, steam them. Mashing potatoes creates more surface area for digestive enzymes to attack, increasing the GI rating.

Foods to Fuel You

The glycemic index (GI) classifies carbohydrates. The higher the number (the GI goes from 1 to 100), the faster a food is digested.

TRUTH: There’s no scientific proof that carbohydrates cause irresistible urges for more food, says James O. Hill, Ph.D., director of the Center for Nutrition at the University of Colorado Health Science Center in Denver. Cravings aren’t well-understood, but there are both psychological and physiological reasons for them.

“The body may prompt cravings for carbohydrates because they’re the most direct route to fuel,” says Hudnall.

To lose weight: If you’re experiencing cravings after eating certain carbohydrates, it may be because you’re consuming too many high-GI, fast-release foods that have little staying power. Add in some low-GI foods at every meal and you’ll feel fuller longer, suggests Burani. Eat a baked potato with beans; add greens, corn, tomatoes, and/or cabbage to rice and pasta dishes. “The mix of high- and low-GI foods will even out your blood sugar surges,” she says.

TRUTH: Although fat gets processed slowly in the gut, so do low-GI foods. “Slow-burning carbohydrates make you feel full for up to five hours, with minimal calories,” says Burani.

To lose weight: Eat more low-GI foods and you’ll burn up to 200 more calories per day. A steady intake of low-GI carbs keeps blood sugar even and slows down the release of insulin, a hormone whose main job is to deliver the sugar into muscle cells for later use as fuel. Under normal conditions, when insulin is low in the bloodstream, the body burns more fat. In contrast, when there is a high level of insulin circulating in the blood, the body is programmed to store fat, says Burani. The higher your blood sugar rises after a meal, the more insulin will be released and the more storage of fat will subsequently occur.

Carbohydrate-rich foods also tell your brain you’re full faster than do fat-laden foods. And that leads to another advantage of eating low-GI carbohydrates, says Burani: They contain lots of fiber, which slows down the digestion process and makes you feel fuller. They also hold a lot of water—another filling factor—and you need to chew them a lot, which can be more satisfying.

MYTH: You shouldn’t eat carbohydrates in the evening—you won’t burn them off, and you’ll get fat.

TRUTH: Frankly, your body doesn’t know what time it is. “There’s no alarm clock that goes off to signal that it’s 6:05 p.m. and every carb you eat from then on must now go to your thighs,” says Berning. Carbohydrates not needed for immediate energy are stored for later use, but they only turn to fat if you eat too many calories, says Hill.

What’s more, most recent studies show that eating at night—whether it’s carbs or not—leads to no more weight gain than day eating. Again, it’s your total calorie count for the day that’s important.

To lose weight: If you tend to get hungry at night, try spreading your calories out over the course of the whole day, with an emphasis on low-GI carbohydrates that will keep your blood glucose level and naturally keep hunger at bay. “Women tend to be really good at restricting their calories during the day, but they end up so ravenous they devour everything in sight at night,” Berning says. Eat small meals every four to five hours during the day to keep your blood sugar on an even keel and your energy level up. The meals should be primarily composed of carbs (55 to 60 percent), with a smattering of protein (10 to 15 percent) and fat (30 percent or less).